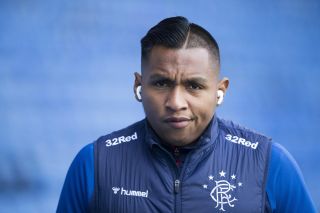 Steven Gerrard claims he was left with no choice but to drop Alfredo Morelos at Tynecastle as punishment for the Rangers top-scorer’s latest breach of discipline.

The 29-goal striker was nowhere to be seen as Gers crashed out of the William Hill Scottish Cup.

With the Colombian suspended for Wednesday’s Europa League clash in Braga, he was given permission to return to his homeland to visit his sick mother.

The visit was sanctioned on the basis he was back in Glasgow on Wednesday so he could rejoin his team-mates the following day to prepare for their Gorgie clash with the Jambos.

But when Morelos failed to touch down in Scotland until Thursday, that was a step too far for Gerrard.

The Ibrox boss has been forced to defend the South American time and time again. He was sent off five times last season and has followed that up with another two red cards this term.

Now he says it would not have been fair on his other players if he did not take action – even though his presence was badly missed as the Light Blues crashed out to a 1-0 defeat in Edinburgh after starting with Greg Stewart up front instead.

Explaining the situation, Gerrard said: “Alfredo came to me, I’m not sure of the exact date, 10 days or so ago and he said his mum wasn’t feeling right so he asked for permission to go back to Colombia, which I granted at the right time and said he could go and sort his family problem out.

“He left after the game on Sunday because he was suspended and I looked him in the eye and said ‘you need to be back on Wednesday’.

“He said ‘OK, I really appreciate that’. He returned 24 hours late and missed one of the key preparation days for this game.

“So I decided to go with people that had done the full preparation and that were desperate to be available for today. That was the decision I made. That is where that is.

“Do I feel let down? I think you should ask his team-mates that question. Only they can answer that.

“This is a kid who I have loved, and still do love him. He is a top player, he has scored a great volume of goals for us.

“But we all know from time to time what he does, what he is about. I couldn’t forget players that are working ever so hard and that are desperate for an opportunity over people that have got discipline like that. I wouldn’t do it because I wouldn’t be true to myself.

“For sure (we needed him), there is no doubt about it. Would he have helped us? I’m sure he would. Would I have picked him if he was back on Wednesday? One hundred per cent.”