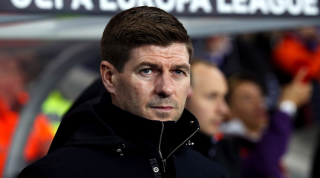 Jermain Defoe has tipped Steven Gerrard to become a “top, top, top manager” after working with him at Rangers.

The former England international moved to Ibrox on loan from Bournemouth in January 2019, and is set to join Rangers on a permanent deal this summer.

Gerrard was appointed as the club’s manager in 2018 and has led the Gers into the last 16 of the Europa League this term.

The ex-Liverpool midfielder has also made Rangers more competitive domestically, and Defoe has relished  the chance to work alongside his former international team-mate.

“I have to give a shout out to my current manager, Mr Gerrard. He’s going to be a top, top, top manager,” he told talkSPORT.

“It’s a funny one because when I signed for Rangers, obviously you have a bit of banter in the changing room and the lads saying about how I’m pals with the gaffer and stuff like that, but he’s a natural.

“In terms of management he’s still fresh and he’s new but you can see that naturally he’s got everything.

“He always says to the players, ‘if you want to come speak to me about anything then my door is open’

“But with Steven, you can talk to him about anything. He reminds me a little bit of Harry Redknapp and Sam Allardyce where you can just approach them and speak about anything.”

The Scottish season is currently on hold until April 30 at the earliest amid the ongoing coronavirus crisis.

The Joint Response Group, consisting of various football authorities, have added that the 2020/21 campaign should start “as soon as is practically possible.”