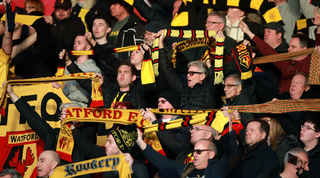 Ordinarily, it’s not in football’s interests to look long and hard at itself. It should be, but it isn’t. Those who hold the cards are doing very well for themselves and seem primarily intent on maintaining a status quo that enlarges their slice of the pie. It would take something unprecedented to challenge this ugly convention, to force a bit of introspection - something like, say, a pandemic shutting down the sport.

You’d have to be old enough to remember when Portsmouth were back-to-back champions of England to have lived through this kind of societal shutdown before. The 1946/47 season may have been protracted by a brutal winter and the government’s desire to end midweek sport in order to increase productivity in the wake of the Second World War, but not since the six years of conflict themselves has the game - well, life - been impacted on the scale we’re experiencing right now. And while war comparisons are generally unhelpful in this different time of crisis, there is one parallel: no one knows when football is coming back.

Experts predict the number of coronavirus cases in the UK to peak between late May and mid-June and plateau for around a month. Suppose that transpires: it’s reasonable to doubt that we’ll be up and running again before August - and even that may be conservative if we have to wait until the disease has been well and truly killed off. The FA have pledged to extend the 2019/20 campaign indefinitely, but every team in the top four divisions has between eight and 10 league matches left - and Manchester City could yet find themselves with another 18 in all competitions. The professional game in England was only suspended on March 13.

As unprecedented and impossible to legislate for as this situation is, it really ought to bring into sharper focus than ever the issue of fixture congestion. The football calendar has long been packed like a stockpiler’s trolley and, just like the panic-buying, it needs to stop - not just because outbreaks like this one are becoming more common and could disrupt future seasons, but also because of the rapid onset of climate change and its potential to do likewise, the often overlooked issue of players’ physical and mental wellbeing - they are not machines - and the dilution of quality due to burnout - probably more pronounced in the lower leagues but present nonetheless. Time to wake up and realise we can’t go on like this.

COVID-19 should - at least for now, hopefully for good - nip in the bud any thoughts of an expanded Champions League. Jürgen Klopp, not one to beat around the bush, has already derided suggestions that Liverpool and other top clubs support an extra four European games as “absolute bollocks” - perhaps a flicker of light amid the greed which shrouds the game at the elite level? West Ham vice-chairman Karren Brady’s motives for suggesting the season be voided were called into question, while you have to wonder about the rationale behind Southampton chief executive Martin Semmens’ apparent desire to see the season resume during social distancing - would the players not still be at risk?

But the current adversity has also brought out football’s generosity. Business partners Gary Neville and Ryan Giggs, Chelsea owner Roman Abramovich, and Crystal Palace’s Wilfried Zaha are offering NHS workers free accommodation; Leeds players are deferring their wages to ensure non-playing staff get paid; various clubs are supporting food banks and other local initiatives; north of the border, Hearts captain Steven Naismith has taken a 50% pay cut. It’s all very commendable stuff, clearly, but while suggesting that it’s the least players can do is an unfairly glass half-empty outlook, the clubs really can - and should - do more. This is the time to push for greater benevolence, change the mindsets of those who aren’t so that way inclined and, in doing so, change the overall mindset of the game and foster a true culture of care.

That doesn’t just mean helping the outside community; it means establishing a proper community within football. Despite the EFL’s promise of a £50 million rescue package, fears among their clubs that they won’t survive the next few months are all too real - while non-league could take a cataclysmic hit. If the potentially devastating effect of this crisis isn’t enough to force the redressal of the disgraceful financial imbalance - not just in the English pyramid but throughout the sport - what will be?

Football is not going to cure coronavirus, but maybe coronavirus will prompt football to finally cure itself.