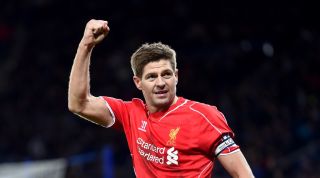 Liverpool will not attempt to re-sign Steven Gerrard in order to get him a Premier League winner's medal, says chief executive Peter Moore.

Gerrard won a Champions League, three League Cups, two FA Cups and a UEFA Cup during his time at Anfield.

However, the former midfielder never got his hands on the Premier League trophy, coming closest when Brendan Rodgers missed out by two points in 2013/14.

Liverpool are currently 22 points clear at the top of the table and look set to win their first league title since 1990.

That has fuelled rumours that Gerrard, who is currently manager of Scottish giants Rangers, could be brought back to Anfield so that he can pocket a winner's medal.

But Moore moved to deny those reports despite acknowledging how important a figure Gerrard still is at the club.

“Let me explain what would have to happen," he told Soccer Laduma.

“So the question is, ‘can we bring Steven Gerrard back to get a Premier League medal?’ and the question I ask you is: which player do you want to cut from the squad to make that happen?

“If you haven't noticed, he's the employee of a different football club at the same time as well.

“Look, we all love Stevie G and we're all very proud of him for his managerial career, but I keep seeing this 'bring him in on a five-day contract so he can win a medal' [but] it just doesn't happen that way.

“Chemistry in a dressing room is important. Can you imagine that? That you have to cut a player, to say 'you're not going to get a medal'?

“It's not like they're handing these things out to everybody, you've got a squad, right? And thirdly, you can't add a player to a squad once it's locked. Other than that, it's really possible.”

Liverpool resume their title tilt with a game against Norwich this weekend.