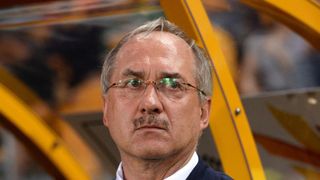 Son struck a brace in extra-time in Melbourne on Thursday, nodding the opening goal through Ignatiy Nesterov's hands just before the break, and smashing another into the roof of the net in the 118th minute.

It was a stunning performance by the 22-year-old, who played the full 120 minutes, despite having missed the majority of the past two matches with illness.

Son started South Korea's opening match against Oman but was absent for the second game versus Kuwait and could only manage 41 minutes off the bench against Australia as he battled a virus.

But against the Uzbeks, Son grew as the game went on, setting up a number of chances for his team-mates, before dominating extra time.

"I was nearly close to taking him out of the game because he was very tired, it was his first game after a long period of sickness but he stood up and he scored the two goals," Stielike said.

The 60-year-old German coach added that Son can play even better, as long as he returns to peak fitness before the end of the continental tournament.

"I don't think we've seen the real Son Heung-min in these four games because of his sickness."

South Korea swarmed all over Uzbekistan in extra time, particularly in the first period and deservedly took the lead when Son got his head to Kim Jin-su's cross.

Although Uzbekistan had a bit more possession in the final 15 minutes of the match, Stielike insisted that South Korea's performance in extra time proved they deserved to reach the semi-finals for the third consecutive Asian Cup.

"I think from the 91st minute onwards, there was only one team on the pitch," he said.

"That's also why I think, with this strong 30 minutes before the end of the game, the victory is going to the right side."

South Korea will face the winner of Iraq versus Iran in the semi-finals.