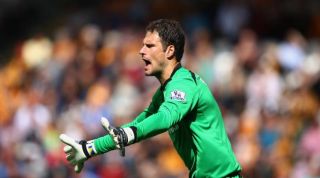 Goalkeeper Asmir Begovic and the versatile Geoff Cameron missed training on Thursday after being struck by illness.

Defender Phil Bardsley was also sent home after revealing that he felt unwell.

Stoke are seeking to bounce back from a 2-1 home defeat against Burnley and Hughes is keeping his fingers crossed that all three players will be available to feature against Brendan Rodgers' men on Merseyside at the weekend.

The Welshman said at a press conference: "We have been struggling to contain the virus. The Under-21s were hit with it earlier in the week and closed their operation down for the last three days.

"Unfortunately today Asmir Begovic, Geoff Cameron and Phil Bardsley have fallen in and are struggling a little bit.

"It could be the time of the year we are in, I don't know. Maybe it could have been picked up from youngsters. We're hoping that it's just a 24-hour thing."

Stoke suffered a blow earlier this week, when it was revealed that winger Victor Moses could be out for more than six weeks with a thigh injury.

Oussama Assaidi, on loan at Stoke from Liverpool, is ineligible to face his parent club on Saturday.