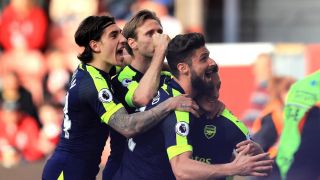 The Arsenal futures of Mesut Ozil and Alexis Sanchez remain in doubt but the duo proved key to avoiding a potential slip-up in their Premier League top-four ambitions at a historic bogey ground with a 4-1 win over Stoke City.

Ozil and Sanchez will be out of contract at Arsenal at the end of next season and negotiations over extensions have been stalling, but they proved their worth with a goal each to send the Gunners one point behind fourth-placed Liverpool, who take on West Ham on Sunday.

After Olivier Giroud's 42nd-minute opener, the pair combined for a sensational second - Sanchez's pinpoint pass finding Ozil in the box and the German obliged with a lovely dink beyond Jack Butland.

Stoke pulled a goal back in controversial fashion as substitute Peter Crouch steered Marko Arnautovic's cross into the back of the net with his hand, but Sanchez eased Arsenal's nerves when his deflected strike found the bottom-left corner with 14 minutes remaining.

Prior to scoring his 50th Premier League goal the Chilean signalled to the bench that he was experiencing discomfort in his left thigh and he was swiftly substituted, and his replacement Aaron Ramsey set up Giroud for his second - the Frenchman justifying his selection ahead of Danny Welbeck.

The result means that should Liverpool fail to pick up maximum points at London Stadium, Arsenal will qualify for next season's Champions League by winning their final two home games against Sunderland and Everton.

Shkodran Mustafi came close to putting Arsenal ahead in the ninth minute but his looping header from Ozil's corner was tipped over by Butland.

Arsenal continued to press and a cross from the returning Hector Bellerin could only be helped towards the back post by Ryan Shawcross, though Nacho Monreal saw his header come back off the upright.

Stoke began to see more of possession but were unable to test Petr Cech on his 400th Premier League appearance and were dealt a blow three minutes before the interval when Bellerin's low delivery from the right was turned in by Giroud.

1 - Olivier Giroud's goal is the first time Arsenal have opened the scoring in a Premier League game at Stoke. Rule.May 13, 2017

Arsenal doubled their advantage in fine fashion 10 minutes after the break. Ozil offloaded to Sanchez and darted towards the box, with the Chilean biding his time before sliding an excellent throughball to the German's feet for a fine finish.

After Mame Biram Diouf spurned an opportunity in the six-yard box, Stoke looked to have set up a tense finale when Crouch illegally diverted Arnautovic's cross into the net without the officials noticing.

The game quickly descended into a scrappy affair but Sanchez reasserted Arsenal's dominance with a cross-goal finish from the edge of the box, a touch off Shawcross helping it on its way.

The Chilean made way for Ramsey and, after being denied by Butland, the Welshman latched onto Ozil's pass in behind the Stoke defence and teed up Giroud for his second.

It was a goal that ended any hope Stoke had of mounting a comeback, though the injury to Sanchez will provide Arsenal with cause for concern ahead of their run-in and the FA Cup final.

We enjoyed that oneAt bet365 Stadium, online, wherever you are in the world - thank you for your superb support during May 13, 2017