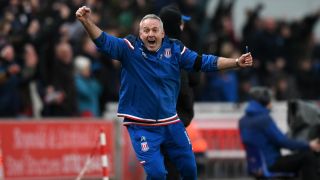 Paul Lambert enjoyed the perfect start to life at Stoke City as a pair of second half goals secured a vital 2-0 win over Huddersfield Town at the bet365 Stadium.

Managing in the top-flight for the first time in almost three years, Lambert had Joe Allen and Mame Biram Diouf to thank for at least momentarily lifting the Potters out of the bottom three.

Allen brought the match to life after a forgettable first half by putting the hosts on course for a first win in five league matches with a cool 53rd minute opener.

And Lambert, whose last Premier League stint ended in dismissal at Aston Villa, was truly able to celebrate when Diouf doubled the lead at the end of a clinical counter-attack.

The striker started in place of reported Chelsea target Peter Crouch and repaid his new boss' faith by sealing the end of a four-match losing run in all competitions.

Huddersfield never threatened either side of the quickfire strikes as their winless run stretched to six league games, leaving them one point ahead of the rejuvenated Potters.

Backed by a boisterous atmosphere, Stoke were full of energy early as Lambert urged his side to get on the front foot.

Mame Biram Diouf replaced Crouch at the point of attack and had an attempt blocked well by Christopher Schindler in the 18th minute, with Charlie Adam blasting a half-volley wide on the follow-up.

The match began to stagnate after a free-flowing first 20 minutes with a string of stray passes and lack of quality in attack.

However, just as the first half appeared set to finish without a shot on target, Shaqiri was put through for a golden chance to break the deadlock.

The Switzerland international raced onto Eric Maxim Choupo-Moting's dinked pass over the top, but his attempted chip from just inside the area was smothered by the onrushing Jonas Lossl.

To Lambert's delight, Allen went one better within eight minutes of the restart.

Choupo-Moting escaped down the left and his cut-back ran across the face of goal to Allen, who side-footed in off the right post despite Scott Malone appearing to be in a position to clear.

The Terriers had Lossl to thank for initially preventing a bigger margin as the German denied Shaqiri and Diouf in quick succession.

Shaqiri failed to make the most of a promising breakaway once more as he cut inside and fired straight at the busy German goalkeeper, but the 26-year-old's class eventually shone through for Stoke's second.

Choupo-Moting was gifted possession by Aaron Mooy's loose pass and his ball into Shaqiri's feet was delightfully flicked on to Diouf, who buried his finish to extend the hosts' margin with just over 20 minutes remaining.

Stoke had a chance to further extend their winning margin only for Choupo-Moting blazed over, but the Terriers' blunt attack meant Lambert's men were never in danger of missing out on a much-needed three points.