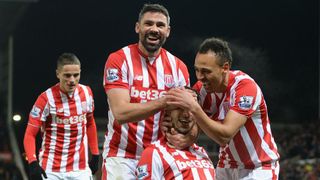 Goals from Joselu and Jonathan Walters helped inspire Stoke City to a 3-1 victory over 10-man Norwich City in the Premier League on Wednesday.

The visitors were rightfully reduced to 10 men just after half an hour when Gary O'Neil was shown a red card for a two-footed challenge on Ibrahim Afellay, and Stoke made their numerical advantage count just after half-time when FA Cup hero Walters followed up his weekend winner over Doncaster Rovers to steer home Marko Arnautovic's inviting cross.

Jonathan Howson powered home a stunning effort from the edge of the area to restore parity, but any hope of salvaging a point was extinguished on 67 minutes courtesy of Joselu's pinpoint drive from just outside the box.

A bad day for the visitors was compounded 13 minutes from time as Stoke secured a well-deserved three points with Ryan Bennett turning into his own net.

The result propels Mark Hughes's men up to seventh, three points behind West Ham in the Europa League spot.

Meanwhile, a disappointing outing for Alex Neil means Norwich will continue to look nervously over their shoulder, with the Canaries still five points clear of the relegation zone.

Despite missing the attacking talents of Xherdan Shaqiri, Stoke made the brighter start, and top scorer Arnautovic forced Declan Rudd into action with a fizzing low drive inside seven minutes.

Howson curled over from 25 yards 10 minutes later as Norwich sought a way into the game, but Stoke continued to probe, with Arnautovic predictably at the centre of their efforts.

A teasing Arnautovic throughball from the left set Joselu free inside the area, but he somehow skewed wide.

Wes Hoolahan nearly made Stoke pay for their profligacy just before half an hour, but his speculative effort from distance drifted wide after Jack Butland's poor clearance.

Butland had to be alert again moments later to keep out Bennett's venomous effort as Norwich began to build momentum.

But their hopes of capitalising on that bright spell were dealt a blow on 31 minutes when O'Neil was shown a straight red card for a reckless two-footed lunge on Afellay as the ball drifted out of play.

Stoke took full advantage and made the deadlock four minutes into the second half, with the lively Arnautovic the architect, winning the ball deep inside the opposing half before whipping in an inviting cross that was duly tucked away by Walters.

However, Norwich refused to surrender, and were level in emphatic style six minutes later when Vadis Odjidja-Ofoe teed the ball up for Howson to fire home on the edge of the area.

But Norwich's hopes of earning a point were dashed when Joselu drilled home from 25 yards.

And a successful shift for the hosts was given the gloss of a third when Bennett headed Afellay's free-kick into his own net on 77 minutes.