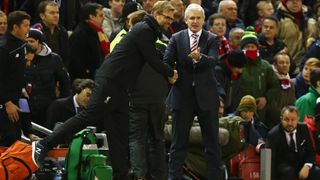 Mark Hughes believes Stoke City were "by far the better team" in their League Cup semi-final defeat to Liverpool on Tuesday.

Trailing 1-0 from the first leg, Stoke levelled the tie at Anfield thanks to a goal from Marko Arnautovic, and created arguably the better chances before the match went to a penalty shoot-out.

Joe Allen struck the winning spot-kick after Simon Mignolet had saved Marc Muniesa's sudden-death effort to send Liverpool into the Wembley final, but Hughes was delighted with his own side's display - especially given what he considered to be a lack of general belief that they could progress.

"I thought we were by far the better team," he told Sky Sports afterwards. "We were behind in the tie and I'm proud of what the players produced.

"Nobody gave us a chance - why they would do that I don't know. We've proved for a couple of years that we're a good team. I think Liverpool were delighted to go to penalties and then it's a lottery.

"In terms of a performance, I thought we merited a win. We got a win on paper - goodness knows how long it's been since we won here - but the objective was to get to a Wembley final which we didn't."

Liverpool will face the winner of the second semi-final between Manchester City and Everton at the Wembley showpiece on February 28.