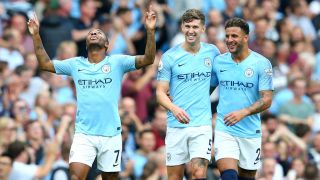 Manchester City's John Stones believes the Premier League champions are capable of improving on their tally of 100 points from last season.

Pep Guardiola's side have shown no signs of letting that form dip, and currently top the league courtesy of an improved goal difference over Liverpool.

And Stones, who played a crucial role in City's triumphs last term before going on to star with England at the World Cup, is confident of repeating, and even bettering the achievements of 2017-18.

"I think it's more of the same, really," Stones told The Telegraph.

"Such a high bar to set ourselves but that bar is there to be broken, to try and beat that.

"And I don't think it's impossible. We've drawn two games but last season at Liverpool we lost so that's another step forward, to go there and [draw].

"Fifty points at home and 50 points away is unheard of as a team and I'd love to keep improving."

PEP: I would say we have four incredible central defenders. When has played, and and John Stones, it is always a good level. That is a good sign for the team [Stones can't play as an] attacking midfielder, winger, striker… no way! October 21, 2018

Stones, who signed for City from Everton in August 2016, struggled to nail down a first-team place in his first season at the Etihad Stadium, while a series of injuries prevented him from playing in much of the club's title run-in.

However, Stones has no doubts that he is improving as a player under Guardiola's tutelage, adding that he has no desire to leave City any time soon.

"I don't think we could do it with any other manager and how he coaches us," Stones said of Guardiola, who has used the former Barnsley man in a holding midfield role and at right-back at times this season.

"It's down to him and his ideas. He's so detailed in what he wants and we all know where everyone is going to be.

"I think being harsh on myself has got me where I am today. I've never hidden away from mistakes or the good things as well.

"I will always try and process everything, be harsh on myself and know that I need to improve.

"I am always willing to learn. I know and the manager knows my best position is centre-half but if I can learn two other positions if needed then it's great for me as a player.

"I would love to [spend the rest of his career at City]. What excites me is that a lot of the lads have signed long contracts and I'd love to play with all of them for years to come."