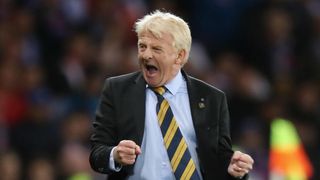 Scotland moved second in Group F after Martin Skrtel turned Ikechi Anya's cross into his own net with one minute to play at Hampden Park on Thursday, with Strachan's men recording a third successive win and clean sheet.

Robert Mak's first-half red card for two bookable offences put Scotland in the box seat but they struggled to break the visitors down before a combination of Chris Martin and Skrtel bundled the ball home to spark jubilant scenes in Glasgow.

Strachan's substitutes Martin and Anya had a decisive impact but the Scotland manager was happy to hand over credit for his side's vital win to divine intervention.

"I genuinely thought we were going to score a goal," Strachan told Sky Sports. "It would have been a huge disappointment if we didn't. That was some performance.

"Slovakia going down to 10 men shook us for a bit because we had done our work against 11 - and then it changes. But we managed to adapt and we created plenty of chances.

"The man of the match for them was the keeper [Martin Dubravka] - he was magnificent. And the crossbar was good as well.

"When you see guys are ready to go on and play, and don't let the disappointment take over, it is easy for you. The 14 boys changed the result from a draw to a victory.

"It says a lot about their fitness. You have got to have fitness to have the mental strength, otherwise you have a weakness.

"We had all these great performances and then the footballing gods decided to give us victory."

Scotland travel to Slovenia on Sunday knowing victory will earn a place in November's play-offs, but Strachan is not yet ready to plan for the next game.

"I've not thought about it," he added. "I'm going to enjoy this for about an hour and a half. We're going to forget about Slovenia until this is over."

Here's how the Group F Table looks with one match left to play. We head to Slovenia on Sunday. October 5, 2017

Although Scotland's winner has been credited as an own goal by Slovakia captain Skrtel, Martin is aiming to claim the strike himself.

"That was the way you want to win a game," the Derby County striker told Sky Sports. "Maybe it was nervy for those watching, but we stayed composed and got what we deserved.

"I hope they give the winning goal to me but I don't know - that's why I didn't celebrate too much.

"It was a great ball in, I knew I had to get there, but Martin Skrtel got a touch. I was delighted to see it creep into the net."