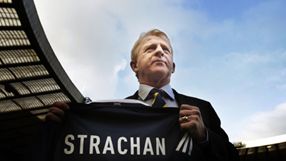 The former Scotland and Manchester United midfielder, who won 50 caps in the 1980s and 1990s, replaces Craig Levein after his sacking in November.

"The fans are more famous than the squad now. They're famous all over the world. So I want to give something back to them," Strachan told a news conference at Glasgow's Hampden Park when asked about the unwavering support of the 'Tartan Army'.

"We want to make a major tournament now," added the 55-year-old ex-Celtic boss, who will get a first look at his new team on February 6 for a home friendly against Estonia.

Strachan will take over the reins of the national side for the remainder of their disappointing 2014 World Cup qualifying campaign and will attempt to guide Scotland to the 2016 European Championship in France where 24 teams, not 16, will compete.

Scotland have not made a major tournament since the 1998 World Cup, also in France, and are bottom of 2014 World Cup European qualifying Group A with two points after four matches, eight behind leaders Belgium and Croatia.

Strachan said that although the format for the European Championship has changed to include eight more nations, the quality of play has gone through the roof.

"The standard throughout Europe is incredible just now, it's come on incredibly well in the last 20 years. So it's harder to get to these things," he said.

"I know there'll be rough times but hopefully there'll be good times as well. If you're successful you can make a nation happy and proud. I've got to try and do that with help from other people."

Strachan, who last managed English second-tier side Middlesbrough for an unhappy spell in 2009 and 2010, identified finding a system that suited the players as vitally important to Scotland's chances of improving.

"It's not far away. I've named a team that I'd like to play like but that's not going to happen right away," said the former Coventry City and Southampton boss.

His old club Celtic showed that unfashionable football played by underdogs can still thrive in the modern fast-paced game when they stunned Barcelona last year in the Champions League group stages.

"Celtic got a result against Barcelona because they played to their strengths," said Strachan.

Scottish FA chief executive Stewart Regan said Strachan's "passion and desire" were key to the former international getting the job, while Strachan himself said the time was right.

"I've had the experience and I like trying to make people better. I think it's a great job. I can deal with this at this time in my life," said Strachan, who also had lengthy playing stints at Leeds United and Aberdeen, where he won the European Cup Winners' Cup in 1983 under Sir Alex Ferguson.