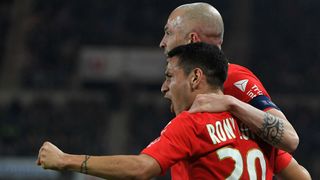 Monaco made it 14 games unbeaten in Ligue 1 on Friday with a 3-1 victory over Strasbourg that cuts Paris Saint-Germain's lead to 11 points.

Leonardo Jardim's side have not been defeated in the league since November and they never looked in trouble at the Stade de la Meinau.

With only five minutes on the clock the visitors were ahead as Stevan Jovetic rose above his marker to glance a header past Alexandre Oukidja – the striker's rich vein of form extending into a fourth successive match.

They were not level for long as Monaco moved back in front two minutes later, Rony Lopes keeping his composure in a crowded penalty area to beat Oukidja.

A thumping drive from Fabinho wrapped up the points before the break, the midfielder surging forward to lash home Keita Balde's pass.

Monaco's winning margin could have been greater had Jovetic's second-half header been better directed, the Montenegrin's effort thudding into the post from Thomas Lemar's delivery.

It mattered little, though, as Monaco moved seven points clear of Marseille in the race for second and an automatic spot in next season's Champions League group stage.