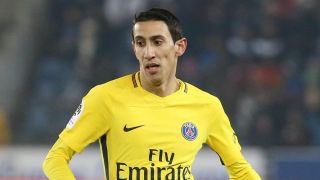 Angel Di Maria scored for the second game running as Paris Saint-Germain won 4-2 at Strasbourg in Coupe de la Ligue and claimed revenge for a defeat at the same ground earlier this month.

Unai Emery's side slipped to their first Ligue 1 defeat of the season when Strasbourg beat them 2-1 at Stade de la Meinau on December 2, but there was to be no repeat.

The visitors forced the opener through a calamitous error from Yoann Salmier, who turned the ball into his own net after 12 minutes, and Di Maria pounced on a goalkeeping mistake to double the lead midway through the first half.

Strasbourg went into the game in fine form, having lost only one of their previous 11 games, and they got under the skin of the league leaders towards the end of the first half, pulling a goal back through Jeremy Grimm.

But PSG ultimately booked their place in the quarter-finals after Dani Alves and Julian Draxler both netted, with substitute Jeremy Blayac grabbing a late consolation for the hosts.

The Parisians played with real poise and purpose from the outset, with Javier Pastore heading wide in the first minute and Edinson Cavani having a low drive saved by Alexandre Oukidja.

Just as Strasbourg seemed to be getting a foothold in the game in the 12th minute, Giovani Lo Celso's deft flick allowed Draxler to set Di Maria free down the left flank and Salmier hooked his bouncing cross into the far corner of the net.

Before the home side could steady themselves, another error doubled their disadvantage when Oukidja went to ground to collect Javier Pastore's throughball into the penalty area but spilled the ball at the feet of Di Maria, who simply rolled it into an empty net.

Pastore played Cavani through on goal three minutes later but he blasted wide from 12 yards out and was made to rue the miss after 36 minutes when Grimm stooped to control Anthony Goncalves' cross and fire a low shot past Kevin Trapp.

Salmier came close to atoning for his earlier error when he connected with Vincent Nogueira's far-post cross early in the second half but he could not apply the finish.

The game was put all but beyond Strasbourg when the ever-industrious Marco Verratti started a neat passing move that ended with Alves sliding in to divert Thomas Meunier's cross into the net with Oukidja well beaten.

The onslaught on Strasbourg's goal continued after Oukidja, who appeared to be struggling with a muscle strain, was replaced by Landry Bonnefoi and Cavani teed up Pastore for a fierce shot from inside the box that the substitute saved before it hit the top corner of the net.

There was a sense of inevitability about PSG's fourth goal, which came from a break down the right and a pull-back by Meunier that allowed Draxler to wrap up a deserved win with a low finish into the bottom-left corner of the net.

Emery sent on Kylian Mbappe for the final 11 minutes of the game but his players took their eye of the ball at the back to allow Blayac a clear run through on goal before scoring through Trapp's legs two minutes from time, drawing unwanted attention to PSG's failure to keep a clean sheet in their last four games.