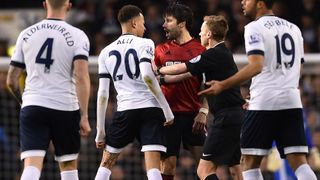 Alli could find himself in trouble after he appeared to punch West Brom's Claudio Yacob in the stomach during his side's 1-1 Premier League draw on Monday.

The 20-year-old star was at the centre of controversy earlier this season after he seemed to kick out at Nenad Tomovic during a Europa League meeting with Fiorentina.

Pochettino was unwilling to be drawn into the Yacob incident, but said Alli was often targeted.

"Dele after Fiorentina was fantastic," he said.

"Sometimes, opponents, they find him, try to provoke him. They know that Dele has a strong character and may react.

"But I didn't see it. I don't know. We'll see it on the TV, nothing to comment now, but Dele has a strong character."

Tottenham's draw was a huge blow to their title chances, leaving them seven points adrift of Leicester City with three games to play.

Pochettino said his side was much different to Claudio Ranieri's men, but he praised the unlikely league leaders nonetheless.

"If you want to compare Leicester with us, we're completely different. They play for counter-attacks, we're different. We play for positions in the opposing half, we try to score goals and I think that we're very different.

"Leicester deserve the position that they're in, it's fully deserved."