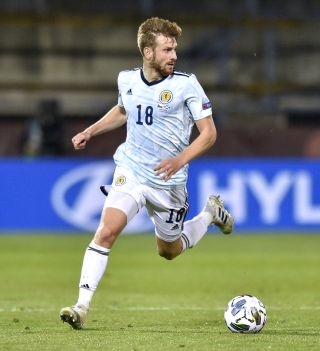 Scotland midfielder Stuart Armstrong has tested positive for Covid-19 ahead of the Euro 2020 play-off semi-final against Israel at Hampden Park on Thursday night.

Armstrong returned a negative test for on arrival at Oriam on Monday but the supplementary UEFA test returned a positive result on Wednesday morning.

The 28-year-old will self-isolate for 10 days from the date of the test – Tuesday, 6 October – and will now be unavailable for the forthcoming international match against Israel and the Nations League matches against Slovakia and the Czech Republic.

As a consequence, Kieran Tierney and Ryan Christie – along with one physiotherapist and one masseur – will require to self-isolate for 14 days as of Tuesday, and will also miss the three games.

All other members of the squad have returned negative results.

Boss Steve Clarke said: “While this is obviously disappointing news the most important thing is the health and safety of the individuals involved and the wider group.

“As soon as we were informed of the positive test, the Chief Medical Consultant immediately contacted the Scottish Government’s clinical adviser, who in turn alerted the local Health Protection Team.

“We have informed the respective clubs from whom we have borrowed the players and backroom staff and we now have to prepare for a huge match ahead tomorrow.”

Scottish FA chief executive Ian Maxwell said: “We were made aware of the positive test this morning and I reiterate Steve’s view that the health and safety of those involved is paramount.

“We will maintain constant dialogue with Dr John MacLean to ensure that those who are required to self-isolate are given the full support of the Scottish FA in conjunction with their clubs and employers.

“Equally, the protocols and procedures in place are designed to ensure that the remaining members of the squad – who have all returned two rounds of negative tests – can continue to prepare for the forthcoming matches in a safe and secure environment.”