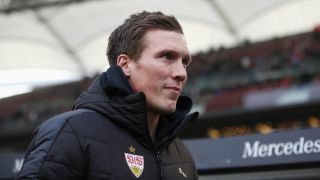 Stuttgart have confirmed the departure of head coach Hannes Wolf after their 2-0 home defeat to Schalke on Saturday.

And following talks in the aftermath of the Schalke loss, which left the club 15th in the table, Stuttgart announced the end of Wolf's tenure on Sunday.

Sporting director Michael Reschke said: "We firmly believe that the danger that the current situation cannot be turned around is too great and that we need a new impulse to get back onto a more successful track.

"None of us wanted to be in this situation and we would very much liked to have continued working with Hannes, because he is an exceptional coach and a wonderful character."

Following intensive discussions yesterday evening, which continued on late into the night as the current sporting situation was analysed, the decision was made that Hannes Wolf would no longer continue as head-coach of Stuttgart. January 28, 2018

Wolf was appointed by Stuttgart in September 2016 and led the club to the 2. Bundesliga title in his first season in charge.

"Unfortunately, in the past few weeks, neither the results nor the performances were good enough," the 36-year-old coach said.

"For that reason, openly and respectfully with those in charge at the club, we came to the conclusion that we must end our cooperation."