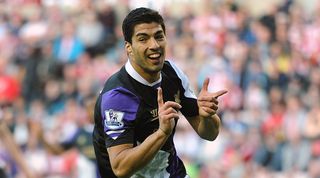 "I am aware that in recent matches that I played I've been calmer," Suarez, who is in Uruguay ahead of their upcoming World Cup qualifiers, said.

"I am very self-critical and I realised that playing well, with more tranquility, is helping me a lot.

"I realise and I prefer to continue and not be the same as before."

Suarez, who was linked with several rival clubs in the off-season, admits Liverpool great Steven Gerrard has been a positive influence on his newfound tranquility.

"Gerrard, for me, is a legend in Liverpool and a great team-mate that helped me a lot," he said.

"His attitude was an extra boost for me to take the decision to stay in Liverpool, both he and the fans of Liverpool influenced much for that.

"I admire him for the great player he is worldwide.

"For me he will always be a benchmark and at club level he is the best player I have played with in my career, as a person and as a footballer."

But while he claims to have turned over a new leaf, the 26-year-old admits he argued with club officials after they initially denied his request to take his children onto the pitch ahead of the recent Crystal Palace match.

"In England it is not common and the first club people told me I was not going to go with them but I told them that my children were going to come with me, like it or not," he said.

"They understood in the end and it was a nice moment, a unique moment for me.

"My family make me think hard and calm me. Nowadays I think a lot of them when I'm on the pitch.

"I wanted my son to live as I do. I suffered a lot as a child and I do not want my children, or any other child, to experience the circumstances as I did.

"As a parent I try to give them all the love in the world and all the best."