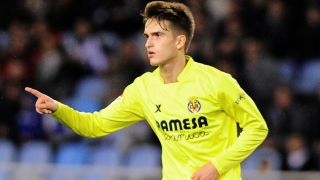 Denis Suarez has revealed his deep admiration for Barcelona legend Andres Iniesta after the 22-year-old secured a return to Camp Nou.

Barca exercised an option to bring the attacking midfielder back to Catalunya after he was sold to Villarreal last August following a loan spell with Sevilla.

Having declared the move "a dream come true" when the signing was announced, Suarez spoke at his official presentation on Wednesday of his excitement at playing with Iniesta.

"He is a role model for everyone in football and I'm so happy to be able to learn things from playing alongside him," he said, before reflecting on his time with Villarreal and Sevilla.

"I grew as a footballer during those experiences. At Sevilla my fitness and tactical awareness improved and I really enjoyed my time at Villarreal because they play a similar kind of football to Barcelona."

Iniesta is one of the most decorated players in football history, having won eight La Liga titles and four Champions League crowns.

Suarez is hoping he too can get his hands on some silverware, as he did with Sevilla when he was part of the side that won the 2014-15 Europa League.

"I'll do all I can to be a success at Barca, this is what I have always dreamt of," added Suarez.

"I want to do everything I can here, but I am aware that this is where the best players in the world are playing. I'll fight as hard as I can for a regular place in the team."