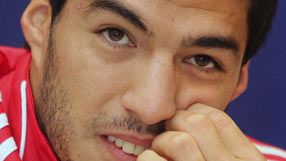 The 23-year-old is expected to leave Holland in either the January or the summer transfer window and has been linked with a move to a host of top European clubs in recent months, including Manchester United, Barcelona and Juventus.

But the Uruguayan forward has made the first move to engineer a move to the Premier League by claiming he would like to talk to Spurs, providing they could meet Ajax's £25-million asking price.

"Suarez has heard of interest from Tottenham and he would be interested in the possibility," an Ajax source told Goal.com UK.

"Maybe before he thought Spurs were too small for him but now he would go there if the right deal was agreed by everyone.

"He would like to challenge himself in one of the big European leagues but at the same time Ajax don't want to sell him and he is very content here.

"To sign him in January would be very expensive as we would need a replacement and the best players cost a lot of money. I don't know if Tottenham can pay what it would take to sign him."

Spurs boss Harry Redknapp has been scouring the market for a world-class striker since the summer and Suarez is thought to be one of a number of forwards he is considering a mid-season swoop for.

And it is believed that Suarez is keen to test himself in one of Europe’s elite leagues, after seeing potential suitors question his goalscoring pedigree due to the perceived poor standard of the Eredivisie.

However, it remains to be seen if Spurs chairman Daniel Levy would sanction a move for Suarez, who is under contract until 2013, as the Uruguayan would be cup-tied in the Champions League after playing for the Dutch giants in the competition this season.