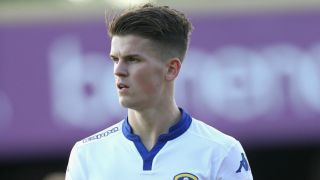 West Ham co-chairman David Sullivan expects the signing of Sam Byram from Leeds United to be completed in the next 24 hours.

Byram has impressed in the Championship this season and was on the brink of a transfer to Everton, something which spurred West Ham to step up their attempts to sign the right-sided player.

Leeds owner Massimo Cellino confirmed Byram had opted for the east London club, and Sullivan disclosed the deal is set to be finalised imminently.

"We hoped to sign Sam Byram in the summer when he was out of contract at Leeds and in the last few days it looked like he was going to Everton, so we realised it was now or never," he said on Sky Sports News.

"So we had to pitch in and attempt to sign him and hopefully that will go through in the next 24 hours. I would not normally say this but the Leeds chairman has made it public - because I think it's wrong to talk about what you're doing until it's actually done - but we have agreed terms with Leeds and the player."

Sullivan also admitted West Ham are close to bringing in an attacking reinforcement in the current window, but would not provide specifics on the individual.

"We are looking at a possibility of bringing in a striker on loan with the condition to buy in the next seven days," he added.

"If I told you [who it was], you wouldn't believe it. I can't tell you [what league they play in] then you'd know who it is.

"It's like when we signed [Manuel] Lanzini from – I don't know what league he was in, but I call it Saudi Arabia, wherever he came from.

"We're signing him from a very strange league but he has played in higher leagues, but it may not happen, it's just a possibility."