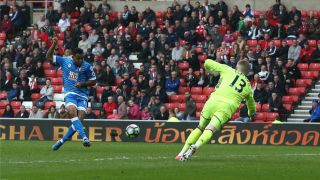 Sunderland became the first team to be relegated from the Premier League this season after Joshua King's late goal consigned David Moyes' men to a 1-0 defeat to Bournemouth on Saturday.

Hull's 0-0 draw at Southampton looked to have provided the hosts with a stay of execution, but King rounded off a rapid Bournemouth break to send Sunderland into the Championship.

After 10 years in the Premier League and a series of close shaves in recent seasons, Sunderland drop out of the top flight with fans chanting angrily against Moyes and owner Ellis Short at the full-time whistle.

King went closest to breaking the deadlock in an end-to-end first half, but the Norway international saw his floated effort clip the crossbar and post when it looked like curling in.

Jermain Defoe missed a series of chances for Sunderland as his dry spell continued and, despite their increasingly desperate efforts, the hosts could not find the goal that would have prolonged their slim hopes of survival.

4 - No side has been relegated from the on more occasions than Sunderland. Goners. April 29, 2017

Bournemouth laid siege to the Sunderland goal in the early minutes, with Steve Cook denied a tap-in by a crucial defensive block before King shot tamely at Jordan Pickford.

Fabio Borini's swerving strike was then beaten away by Artur Boruc at the other end and Defoe could not adjust his body to turn in the rebound in a lively opening at the Stadium of Light.

Defoe wasted another decent opening by blasting over the top after 18 minutes, then King's curling effort somehow hit the angle of post and bar before bouncing into the arms of a grateful Pickford.

Defoe's goal touch has deserted him in recent weeks - the England international has not scored in the Premier League since February 4 - and he ought to have done better after 28 minutes than volley straight at Boruc after a concerted spell of Sunderland pressure.

Bournemouth remained a threat on the break, however, and Donald Love was forced to clear a King shot off the line before Benik Afobe had two powerful strikes blocked.

Marc Pugh bent an effort just wide at the start of the second period before Boruc made a vital save by blocking Borini's shot after Defoe had sent the Italian through on goal.

Boruc was again the key man for the visitors when he parried substitute George Honeyman's effort after 65 minutes, then Pugh headed an Adam Smith cross over the bar.

Tensions boiled over with 15 minutes to go after Borini's poor challenge on Lewis Cook, but while Sunderland's players showed plenty of fight in the closing stages they could not find a way past Boruc, who saved again from Borini.

And the goalkeeper's heroics proved vital as Bournemouth snatched all three points with a breakaway goal with just two minutes to go.

Substitute Lys Mousset led the counter and slipped Ryan Fraser into the box, with the winger pulling the ball back for King to tap home from close range.