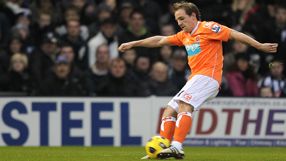 Asked about his hopes for the new season, he said: "Hopefully, they can move on and build on what they have done in the last few years.

"The signings that we have made over the last few weeks have been impressive, so hopefully we can kick on and at least be in the top 10, if not the top six, teams in the country."

Vaughan is the latest recruit to a new-look squad being assembled by manager Steve Bruce who has signed goalkeeper Keiren Westwood from Coventry City and Birmingham City midfielder Sebastian Larsson as well as Egyptian forward Ahmed Elmohamady, who was on loan last season.

Teenager Connor Wickham from Ipswich Town, Ji Dong-won from Chunnam Dragons in South Korea and Craig Gardner from relegated Birmingham City are the other new recruits.

Bruce said: "David was excellent throughout last season, including both games against us, so it's only natural that he caught the attention of a number of top clubs.

"We are delighted that he sees his future at Sunderland. His experience, grit and energy in midfield will be valuable assets to us and we are now looking forward to him joining up with the squad for pre-season training."