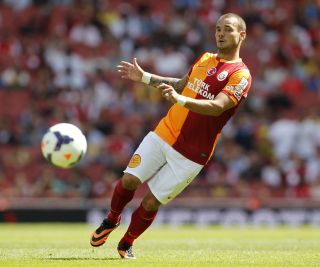 Netherlands international Wesley Sneijder fired Fatih Terim's side ahead within 10 minutes at the Turk Telekom Arena.

And it got better in the second half when Burak Yilmaz opened his account for the season from the penalty spot to effectively end the game as a contest.

The away side grabbed a consolation from Muhammet Demir in the 76th minute but they were unable to stop the defending champions from opening their campaign with a win.

Elsewhere, last season's league runners-up Fenerbahce suffered an opening-day shock as they surrendered a 2-0 lead to lose 3-2 away to Konyaspor on Saturday.

Joseph Yobo and an Emre Belozoglu penalty had given Ersun Yanal's side a two-goal cushion inside half an hour at the Konya Ataturk Spor Kompleksi.

And they were looking equally comfortable in the second half until two goals in a minute from Tomas Borek and Ali Camdali shocked Fenerbahce.

The turnaround was complete with four minutes remaining when Recep Aydin sent the home fans into raptures.

Also on Saturday, Karabukspor were triumphant 2-0 against Kasimpasa, while newly promoted Rizespor enjoyed home success as well with a 1-0 win over Genclerbirligi.

Besiktas are hopeful of breaking into the UEFA Champions League places this season and made the ideal start with a 2-0 home win over Trabzonspor.

Slaven Bilic's team had to be patient for victory with the away side showing stubborn resistance at the Recep Tayyip Erdogan Stadyumu.

But two goals in the last 15 minutes from Olcay Sahan and Gokhan Tore ensured Besiktas started with a win.

Bursaspor are another side that harbour hopes of playing in Europe's elite competition, but their season started with a 2-0 defeat away to Eskisehirspor.

The game looked like it was heading for a draw until Argentine defender Renato Civelli scored past his own goalkeeper in the 76th minute and Henri Bienvenu added a second with nine minutes remaining.

Akhisar Belediye were also victors on Sunday as they defeated Elazigspor 3-1, while Antalyaspor and Kayseri Erciyesspor played out a 0-0 draw on Friday.