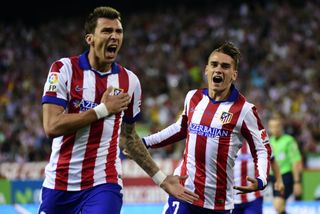 Raul Garcia's last-gasp goal at the Santiago Bernabeu on Tuesday had put Atletico into a strong position, though they required a first home win over Real since June 1999 to secure the first trophy of Spain's season.

After a strong end in midweek, Liga champions Atletico got off to a dream start at the Vicente Calderon on Friday, Mandzukic opening his account for the club with the Supercopa's quickest ever goal, coming just 81 seconds into the contest after ponderous Real defending.

A typically ill-tempered clash saw a raging Diego Simeone dismissed from the touchline only 26 minutes in.

Cristiano Ronaldo appeared despite picking up an injury in the first leg, but the Portuguese's presence could not inspire Real back into the match, and Luka Modric's late sending off summed up their frustrations.

Carlo Ancelotti packed the pitch with attacking talent, though wantaway Angel di Maria was not at the Italian's disposal and Real's perceived invincibility in pre-season has already taken a dent.

For Atletico, the triumph brings the fifth trophy of Simeone's reign and makes up for last season's Supercopa loss to Barcelona.

With Ronaldo fit enough only for the bench, the absence of Di Maria and Sami Khedira from Ancelotti's squad was noteworthy as both midfielders itch for a move before the transfer window slams shut.

And the partnership reaped instant reward just 81 seconds in as the Frenchman pounced on slack Sergio Ramos marking to give Mandzukic the simple task of beating Iker Casillas one-on-one.

A scrappy response was interjected by clashes between players, as Simeone simmered on the sidelines.

Miguel Angel Moya superbly denied James Rodriguez 23 minutes in low to his right after fine work on the edge of the area from Daniel Carvajal.

Eventually, the Argentinian boss boiled over as Fabio Coentrao's trailing leg caught Juanfran in the face and Simeone marched to the stands whipping the home fans into a frenzy after being ejected by referee David Fernandez.

Simeone's departure perhaps affected Atletico and Real looked more likely to score afterwards, however, Gareth Bale and Rodriguez could not direct late efforts on target as the hosts made it to the break ahead.

Ronaldo emerged from the bench at half-time, but Atletico went close early on in the second half as Garcia's flick bounced onto the goalline and was eventually scrambled clear.

Garcia again curled wide, though Ronaldo began to come to life around the hour mark, blasting a 30-yarder down Moya's throat.

As Ronaldo and Bale saw vociferous penalty appeals waved away, Real grew frustrated and Atletico sensed the chance to pick them off

First Koke launched a swerving effort inches over Casillas' crossbar, before Griezmann dragged across goal after a rapid breakaway.

A Real onslaught failed to materialise as poor touches from Bale and Ronaldo in the final third saw late openings fizzle into nothing and Modric was dismissed after a late challenge on substitute Cristian Rodriguez.

And Atletico held on for an impressive victory, starting the season in supreme fashion as they look to prove last season's title win was no fluke.