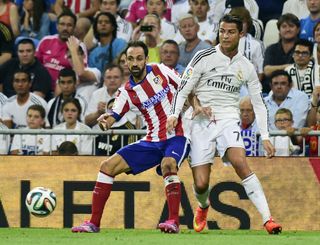 The Portuguese star was substituted at the break at The Santiago Bernabeu with a suspected leg injury on Tuesday.

Ronaldo was largely anonymous during the first half as Real struggled to break down their visitors before James Rodriguez opened the scoring in the 81st minute.

But as the Colombia attacking midfielder looked set to be the hero, Raul Garcia levelled for the visitors.

If they are to add to their UEFA Super Cup trophy already won this season, Real will need a result away from home on Friday.

Carlo Ancelotti made two changes to the starting team that claimed the UEFA Super Cup with a 2-0 win over Sevilla on August 12.

Xabi Alonso took Rodriguez's place in midfield and Marcelo came in at left-back with Fabio Coentrao dropped to the bench.

In their first competitive game since losing to Real in the UEFA Champions League final, La Liga champions Atletico had just six players from that starting XI in the line-up again.

Pre-game, a touching tribute was paid to Real Madrid great Alfredo Di Stefano, who died in July at the age of 88.

The hosts started the better and more lively of the two teams, pushing Atletico deep.

Rash challenges from Koke and Guilherme Siqueira saw the Atletico pair into the book inside 12 minutes.

Mario Mandzukic and Saul had opportunities for Atletico soon after, but goalkeeper Iker Casillas denied both.

The latter came after Saul dispossessed Sergio Ramos, and he perhaps should have done better than direct his shot straight at Casillas from 20 yards.

Mandzukic had another decent chance after Casillas could only punch a clearance straight to him, but the Croatia international's attempted lob went straight into the goalkeeper's hands.

Gareth Bale almost opened the scoring two minutes into the second half as he forced Atletico goalkeeper Miguel Angel Moya into a strong save from an angle.

Moya was needed again in the 68th minute as he pushed away a powerful Bale free-kick, before Toni Kroos volleyed the rebound well over from inside the area.

Karim Benzema put a header onto the roof of the net before Rodriguez, who replaced Ronaldo, made the breakthrough.

Kroos played Daniel Carvajal in down the right and his cross was aimed for Benzema before a scramble led to Rodriguez finishing via a deflection.

But Atletico would find a way in the 88th minute as Garcia tapped in Koke's corner after being left unmarked right in front of Casillas.

Real had a penalty shout turned down late in the encounter as they were left on the back foot heading into the second leg.