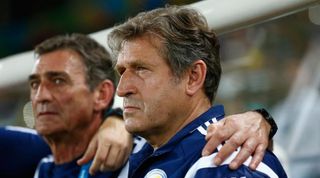 Goals from Edin Dzeko, Miralem Pjanic and Avdija Vrsajevic made history for Bosnia, who put defeats against Argentina and Nigeria behind them with a stylish 3-1 win in Salvador.

Bosnia, who finished third in Group F, knew their fate prior to kick-off and that showed in their play as they took the game on.

And although they have exited the tournament - as have Iran, who finished bottom following the defeat - Susic was proud of the way Bosnia ended their first World Cup campaign.

"I congratulate the players on a good game and win," said Susic. "We are uplifted as we head back home.

"There was a little more luck and fewer mistakes (today).

"We lacked international experience, but I cannot complain about the players.

"There are good guys here, and we have to start thinking about qualifying for the (2016) European Championships."