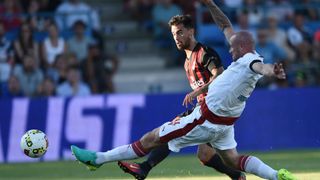 A first-half brace from Suso gave AC Milan a 2-1 friendly win over Bordeaux in Vincenzo Montella's first game in charge.

Spanish playmaker Suso, who spent last season on loan at Genoa, pounced on some slack defending to open the scoring after 29 minutes.

Milan had a healthy cushion seven minutes before the break when Jeremy Menez tenaciously won possession on the halfway line and Giacomo Bonaventura streamed in field from the left.

Bonaventura fed Suso, who coolly curled a left-footed shot across goal into the far corner.

Bordeaux reduced the arrears when Malcom swivelled to send home a low shot in the 74th minute and the teenage Brazilian forward, formerly of Corinthians, passed up two further chances to level matters as the clock ticked down.