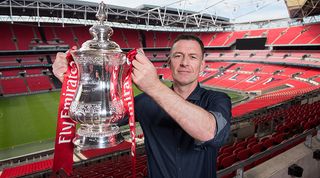 “If it goes to form, Chelsea will be too strong from Arsenal,” the BT Sport pundit told FourFourTwo. “Player for player, they’re much stronger. There’s only really Alexis Sanchez on the Arsenal side that I think would get into the Chelsea team – maybe Hector Bellerin as well. If both play to their current capabilities, Chelsea will come out on top.”

“I’ve been very incredibly surprised by Chelsea this year, the turnaround from last year has been amazing,” he added.

“It’s testament to Conte, he’s done an incredible job, one that nobody could really have foreseen, especially given some of the problems they had at the start of the season. But he changed formation and showed that he was really adaptable.”

Sutton remains a huge fan of the FA Cup, but his own favourite memory of the tournament didn’t come in a Blue shirt – he admits he was very disappointed to not get picked for the 2000 final, after netting for Chelsea in the semi.

“Scoring for Norwich against Southampton as a youngster was the best moment in the cup for me,” he says. “It was the quarter-finals, and I got one in extra time past Tim Flowers at Carrow Road. That was just fantastic.

“It was a good, old-fashioned, muddy FA Cup game and I loved it – the most important goal I’d scored at that point in my career. To score in such a big game is brilliant for a youngster.”