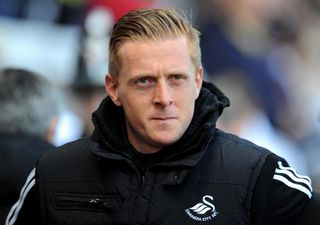 Defender Monk was appointed as Michael Laudrup's successor in February and has helped guide the Welsh club to Premier League safety after a mixed first half of the season.

Back-to-back wins over Newcastle United and Aston Villa have led to calls for the 35-year-old to be given more time in the role and captain Ashley Williams has championed the cause for the man he has played alongside on so many occasions.

Jenkins believes a quick resolution will benefit the club in their planning for next season and knows full well the importance of his next appointment.

"Over the next couple of weeks we are going to talk things through with Garry and reflect on his time in charge," Jenkins told The South Wales Evening Post.

"We all agree that we would like to get everything sorted and clarified as soon as we can.

"The decision we are going to make will be a huge decision and obviously it will be made in the best interests of the club going forward.

"Hopefully it will be a long-term decision that gets the club in the position where we want to be."

Monk said on Saturday he was keen to hold discussions with the board "very soon" over his future, with Williams stating how impressed he had been with the former Swansea captain his he took the helm.

"Fair play to him, he's doing his job properly and I think he deserves his chance. But I don't get paid to make the decisions," Williams explained this week.