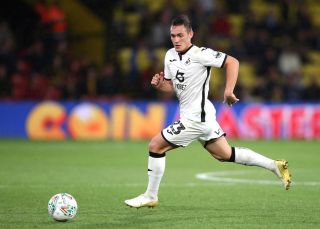 Swansea and QPR fought out a drab goalless draw at the Liberty Stadium that must have left watching Wales manager Ryan Giggs unimpressed.

Giggs was among the 14,778 crowd – one of Swansea’s lowest of the season – as he ran the rule over defenders Connor Roberts and Joe Rodon with the 2020 European Championship on the horizon.

But Giggs had to endure a low-quality Sky Bet Championship encounter which suggested neither side are capable of putting together the sort of run required to make the play-off places.

Swansea started the evening just four points short of the top six, but could not manage one single on-target attempt in 90 minutes of huff and puff.

QPR are nearer the bottom three – nine points above the relegation zone at kick-off – than the play-off positions, but at least they had the satisfaction of ending a run of four straight defeats in all competitions.

Swansea had been rocked by a Derby comeback on Saturday and there was a clear lack of defensive confidence in the early stages.

Centre-back Marc Guehi and goalkeeper Freddie Woodman almost saw errors punished and Jordan Hugill lofted over after Swansea old-boy Angel Rangel had prodded the ball through to him.

Swansea failed to turn their dominant possession into chances, although Andre Ayew dribbled past a few Rangers defenders before team-mate Roberts inadvertently blocked his goal-bound drive.

Rangers had less of the ball but carried the greater goal threat, a point Bright Osayi-Samuel underlined when he tricked his way past Rodon and Woodman hacked away his shot at the near post.

Rangel was booked for felling Rhian Brewster on his Liberty return, but it was Rangers who menaced as the interval approached.

Yoann Barbet steered wide at the far post and Osayi-Samuel’s mazy run and one-two with the elegant Ebere Eze ended with a soft effort at Woodman.

Swansea raised the tempo at the start of the second half and Bersant Celina drove across goal as he appeared to be caught between cross and shot.

Yan Dhanda then fell in the area as he burst onto Brewster’s pass, but referee Andy Woolmer judged there had been no contact from Barbet.

QPR’s threat had receded in the second period but they were almost rewarded when Conor Gallagher gifted possession to Marc Pugh in the final third.

Pugh’s cross was half-cleared to Geoff Cameron and Swansea were thankful for Rodon getting in the way at the expense of a corner.

That chance re-energised Rangers and Osayi-Samuel delivered a delightful cross into the six-yard box to no avail, as the game petered out into a disappointing draw.