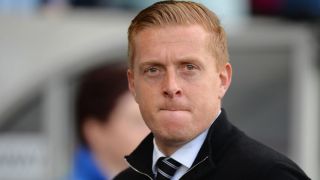 Swansea have only won once in the Premier League since August - a 2-1 win over bottom-placed Aston Villa - which has seen them slip to 15th in the table.

Monk was nominated for the Premier League Manager of the Month Award for August after their start to the season had them in the Champions League places.

However, after their 3-0 home defeat to Leicester City on Saturday, Monk admitted that he feared for his future at the Welsh club.

But Bellamy thinks Swansea would be left to rue their decision if they get rid of the 36-year-old.

"If Swansea get rid of him I believe it would be a massive mistake and I’m quite strong on that," Bellamy said on Sky Sports.

"Last year he was the best manager in their history. Yes, he’s a young manager and people talk about experience, but give him experience through a bad time."

Bellamy added: "As a club, you will benefit through this experience.

"I don’t feel Swansea will get relegated so stick with this man. He’s been with them a long time and seen the transitional period, and Swansea will be a better club with Monk involved."

Swansea's next test is away to Manchester City in the Premier League on Saturday.