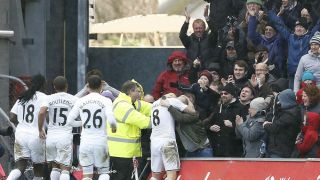 Swansea City supporters have been given more to cheer about ahead of the new Premier League season, with the club ensuring affordable away tickets throughout 2015-16.

The Welsh club's fans face an average trip of over 200 miles per away game in the league, though they should have plenty of spare cash for transport with adult tickets to cost a maximum of £22, provided they sign up to Swansea's 'Jack Army membership scheme'.

"But we believe our 'True to 22' pledge has taken it to a new level.

"We worked hard on reducing away ticket prices for our supporters last season through reciprocal deals with other clubs. Unfortunately, we were unable to finalise deals with all the clubs for different reasons.

"Therefore, while we introduced other away fan benefits, we felt it would be more beneficial to our supporters if we took the step of guaranteeing them cheaper tickets for all our away games, whether there was a reciprocal deal in place or not."