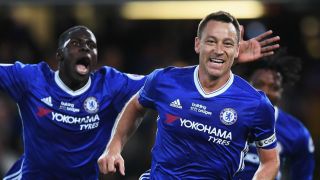 Clement revealed last month he would explore the possibility of signing the 36-year-old if his side secured Premier League safety, which they have now done after Hull City's relegation.

And the Swansea boss will press ahead with an approach for Terry, even though he is not sure what other negotiations the defender has held.

Terry, who is leaving Chelsea after 22 years when his contract expires, insisted no decision had been made and stated that retirement could even be an option in the aftermath of the dramatic 4-3 win over Watford – a match in which he scored the opening goal.

"The fact is I know John, he is a top player and a free agent," Clement, who has previously worked with Terry while at Chelsea in numerous coaching roles, told reporters.

"So it would only be sensible to have a discussion with him to see if he would be interested.

"I don't know if he has already decided on somewhere else. A lot of the time these things are already done.

Clement made an unsuccessful attempt to sign Terry's fellow Chelsea icon Frank Lampard in January, the midfielder instead opting to hang up his boots.

Having collected 10 points from their last four matches, Swansea finish their season with a home game against West Brom on Sunday.