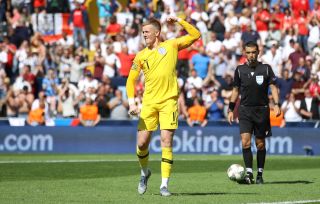 Jordan Pickford was England’s penalty shoot-out hero once again as Gareth Southgate’s men eventually overcame Switzerland to bring an exciting end to a tepid third-place play-off in the Nations League.

Three days on from losing their semi-final to Holland due to two defensive gifts and a narrow offside call, the Three Lions returned to a far quieter Estadio D Afonso Henriques for Sunday’s battle for bronze.

Callum Wilson thought he had grabbed a late winner ruled until the video assistant referee intervened in Guimaraes, where England dominated throughout only for the match to end 0-0 after 120 minutes.

The match went to spot-kicks and Pickford again came into his own in the shootout, denying Josip Drmic in sudden death after scoring his own spot-kick as the Three Lions won 6-5 on penalties.

It was a positive note at the end of a forgettable match that at least brings the team bronze medals and penalty confidence ahead of Euro 2020.

England should have had the match wrapped up long before the shootout, though, with the Swiss goal frame rattled four times across the 120 minutes.

Southgate’s men even thought they had snatched an 84th-minute winner through Wilson, only for VAR to spot his foul on Manuel Akanji.

It meant an extra 30 minutes of the match no one wanted and eventually penalties, with Pickford emulating his last-16 heroics against Colombia at last year’s World Cup as England won another shootout.

It brought a welcome buzz at the end of a drab match that saw seven Southgate made changes, with John Stones among those going out as Kane returned.

Less than two minutes were on the clock when the 25-year-old tried a chipped attempt from an acute angle, with goalkeeper Yann Sommer just able to tip onto the crossbar.

It proved to be a rare moment of creativity in a first half that saw England dominate without punishing the Swiss.

Raheem Sterling wasted a glorious chance in the 14th minute when put through by Kane’s nifty footwork and firing straight at Sommer.

Mistiming his run onto a Trent Alexander-Arnold cross soon compounded matters, while Dele Alli became the next to waste an excellent ball by the England right-back as he powered a header over.

Switzerland were creating precious little at the other end as they struggled to click into gear England continued in the ascendancy after the break.

Kane’s unsettling presence saw Fabian Schar stretch to prevent him reaching a Danny Rose cross, only for the defender to turn the ball onto the far post of his own goal.

1 – Jordan Pickford was the first-ever goalkeeper to take (and score) a penalty for England in a competitive penalty shootout. Character. pic.twitter.com/HcYw979sbm— OptaJoe (@OptaJoe) June 9, 2019

Granit Xhaka saw a first-time strike denied by Pickford straight after but things soon slowed in a bumbling second half.

Harry Maguire’s turn on the edge of his own six-yard box brought a rare moment to cheer after days of talk about playing it out from the back, before there finally seemed to be a breakthrough in the 84th minute.

Alli met with a Sterling cross with header that crashed back off the frame of the goal and Wilson reacted quickest to fire home from close range.

Relief and joy soon became frustration, though, as VAR would again rule out a late England winner, with referee Ovidiu Hategan checking the monitor and seeing Wilson’s foul on Akanji.

Xhaka blocked before the match entered extra time, which started with Sterling and Eric Dier having half-hearted efforts.

Sommer did superbly when England threatened next, denying Alli before stopping Sterling’s follow-up.

Wilson was thwarted by a late tackle in the second period, which saw Sterling whack the crossbar with a 20-yard free-kick three minutes from time.

It was the last chance and the match went to penalties.

Maguire and Ross Barkley took different approaches but scored their spot-kicks, as did Jadon Sancho and Sterling despite Sommer going the right way.

Pickford took off his gloves to fire a spot-kick of his own home, but he was unable to stop any of the first five Swiss efforts as the shootout went to sudden death.

Eric Dier struck home the first before Josip Drmic was denied, with Pickford diving to his right to paw away the strike and seal victory.