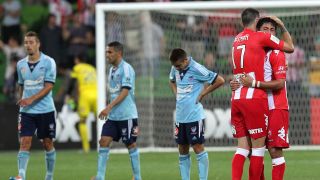 Just five days after the Sky Blues tore through Melbourne Victory in a 5-0 mauling, Farina's team couldn't find that intensity against the league's bottom-placed side as Heart came from behind for a famous 2-1 win, sealed through David Williams' spectacular 89th-minute solo goal.

Farina couldn't explain why Sydney didn't make Heart pay when the Melbourne side appeared ripe for the picking following Orlando Engelaar's 33rd-minute dismissal for a crude challenge on Hagi Gligor.

"We should have," Farina declared. "It was like we played with 10 men the second half.

"Both the goals were very bad mistakes from us and we were punished.

"I think the first one against us was a goalkeeping blunder to a degree and the second one, Richie's (Garcia) lost it in the middle of the park when we're under no pressure and one-against-three gets in and scores."

Along with conceding poor goals, Farina couldn't explain his side's drop in application as Heart controlled possession from the outset and barely looked troubled during the second half despite Sydney having the man advantage.

"We weren't at the races tonight, but particularly in that second half, that's just disappointing," he said.

"If I had the answer for inconsistency, I'd be the greatest manager in the world but it rears its ugly head there again tonight.

"For me it boils down to the fundamentals of football, keeping the ball and we failed to do that particularly in the second half."

Both Farina and his Heart counterpart John van 't Schip felt Engelaar was stiff to earn a straight red from referee Jared Gillett for a clumsy but hardly malicious studs-up challenge on Gligor in the 33rd-minute.

"It was obvious that it was not a tackle to break someone's leg," van 't Schip said.

"I personally thought that was a very hard decision.

"That was a foul because he was too late but he misjudged the situation and the pitch was a little bit wet he said, but he didn't hit the player in a hard way.

"He said he got his leg back in the situation where he went down so he hardly hit the player and I think the referee maybe could have thought a few seconds longer before just immediately getting to his red card."

Farina agreed, saying the red card inflamed the contest and may have resulted in more yellow cards as tempers frayed, particularly for Sydney, even if two of those cautions were for kicking the ball away.

"I didn't feel it was a red card for Engelaar," Farina said. "I thought that was a very harsh decision, direct red.

"And from then on, it just becomes reaching into the pocket.

"That's the way it goes sometimes when you give a player a red card, it's just that mental thing that works on a referee and tonight I thought there was too many yellows."