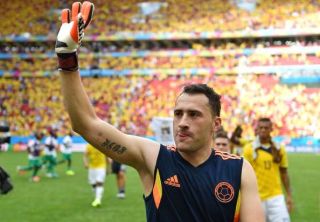 Ospina's arrival from Nice appears to be imminent after Arsenal manager Wenger suggested that he will be vying with Szczesny for a starting berth at the Emirates Stadium.

Szczesny is in line to start the season between the sticks, but Colombia international Ospina could yet dislodge him.

"You know at the start Szczesny will be the number one, then again we'll be down to performances and, if Ospina shows that he is better, he will play," Wenger told ESPN.

Poland keeper Szczesny started all but one Premier League game last season, though Lukasz Fabianski - who has since left for Swansea City - was preferred in the FA Cup, which Arsenal won.

Ospina made 29 Ligue 1 appearances as Nice finished just two points above the relegation zone last term, and impressed in Colombia's run to the quarter-finals at the World Cup in Brazil.

Nice suffered a setback in the goalkeeping department on Friday when it was confirmed Joris Delle has ruptured the cruciate ligaments in his left knee, sidelining him for several months.