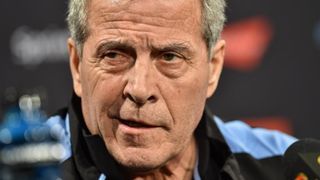 Oscar Tabarez insists he will continue as Uruguay coach despite battling with illness.

The 69-year-old was forced to use a mobility scooter and a walking stick during the Copa America Centenario last month as Uruguay were eliminated in the group stages.

Uruguay lost to Mexico and Venezuela in Group C to miss out on the quarter-finals in the United States, but managed to defeat Jamaica 3-0 in a dead rubber.

However, with Uruguay top of the CONMEBOL qualification group for the 2018 World Cup in Russia, Tabarez says he will not be stepping down any time soon.

"I will continue [as Uruguay coach]. At least until the results say otherwise," the 69-year-old, who has been in charge of Uruguay for almost a decade, told Ovacion.

"When you are coach you know you are displayed by the results."

Tabarez also sought to clarify his condition - which was reported to be Guillain-Barre syndrome - saying he is suffering from "chronic neuropathy".

"My illness I have talked about with who I need to talk about it with," he said. "All the higher ups at the AUF knew that I had to move around in a cart.

"Still, nothing changes with my job, or dealing with players."