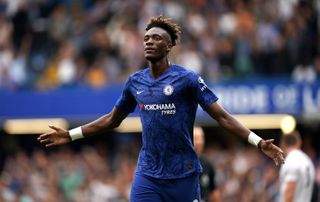 Aston Villa boss Dean Smith has backed Tammy Abraham to rise to the challenge of playing with Timo Werner at Chelsea.

England international Abraham faces serious new competition at Stamford Bridge after the Blues struck a deal for RB Leipzig forward Werner for around £47.5million this week.

The 22-year-old makes his first return to Villa Park on Sunday after firing them back to the Premier League last season with 26 goals while on loan from Chelsea.

Abraham has scored 15 times for Chelsea ahead of their Premier League return after the season was halted in March and Smith believes he will relish Werner’s arrival.

He said: “Tammy will see it as a challenge, he has got the number-nine shirt and he’ll want to keep it. I don’t see any reason why he can’t play with Werner but who knows what Frank’s (Lampard) thoughts are on his team.

“Knowing Tammy, he is a top guy with a superb attitude and a top player. He is the real deal, everything about him. He sets standards and maintains them and then tries to push them even more.

“To be a top-level player you have to have those standards and be driven.

“He has done what I expected him to do. Fortunately for Tammy, Frank and Jody (Morris) have gone in there and shown him, Fikayo Tomori, Mason Mount, Reece James faith and Tammy has repaid them in the way I thought he would.

“We loved having him here and we played a part of his development. He’ll always have a strong affinity for Aston Villa but we’re really pleased to see how he’s done.”

Villa are a point from the safety line after Wednesday’s 0-0 draw with Sheffield United restarted the Premier League after an enforced three-month break.

All games are behind closed doors with strict safety restrictions but Smith feels Villa could have the edge on Sunday having already played in an empty stadium.

“What can be advantageous is that we’ve played in those conditions,” he said.

“It felt like we were playing a home game, the flags were there, the crowd faces on the screen, the only thing missing was crowd noise and the atmosphere.

“We spoke to the players about mentality and how they can drive each other on and we got a bit of that from them.”

Meanwhile, Villa are in the process of tying up the loan extensions of Pepe Reina from AC Milan and Danny Drinkwater from Chelsea.

“We’ve got until next week and I believe they’re in the process of being agreed,” Smith added.