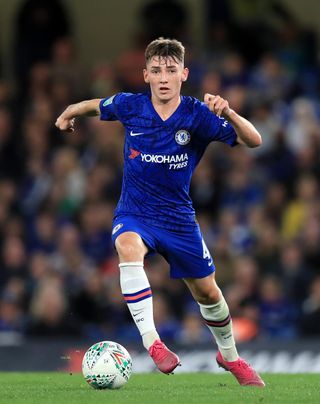 Now the teenage Scottish midfielder will battle to add to the two top-flight appearances he has made this term.

And Gilmour admitted he has realised a big dream in taking a sizeable step forward in his career.

“It’s a massive moment for me and I’m really happy,” said Gilmour.

“I went with the squad to Leicester and even though I wasn’t involved, the gaffer pulled me afterwards to tell me that after the winter break I’d be with the first-team permanently.

“It’s a dream come true for me. It’s the first big step I think, moving into the first team dressing room at a club like Chelsea. It’s massive for me.”

Lampard did not hide any frustrations with Chelsea’s inability to bolster their squad in the January transfer window, previously insisting the Blues are now “underdogs” for a top-four finish.

The former England midfielder has moved quickly to promote Gilmour however, in yet another demonstration of his faith in the young talent emerging through the Stamford Bridge ranks.

And Gilmour admitted Lampard’s support is a constant boost to the youngsters bidding to make their name in west London.

“Knowing that the manager has such faith in you is massive, it gives me so much confidence when I step onto the field,” Gilmour told Chelsea’s official club website.

“It’s really good knowing that he trusts in you and likes the way you play, and I think that’s the same for everyone here. Age isn’t really an issue here. The gaffer has shown that if you work hard and perform well, then you will get opportunities.

“Hopefully I can keep pushing on and work hard every day in training.”