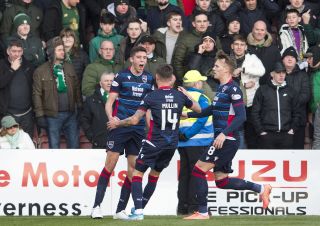 Ross Stewart kept his cool as Ross County opened their Scottish Premiership campaign with a 1-0 victory over 10-man Motherwell in a tale of two penalties.

Stewart converted from the spot in the 24th minute after the hosts made a bright start, while Liam Donnelly missed the target from 12 yards in the 73rd minute as the visitors failed to make their second-half pressure count.

Christopher Long and Callum Lang also passed up chances before the latter was sent off on his debut for a cynical challenge.

Well goalkeeper Trevor Carson made his first competitive appearance since suffering deep vein thrombosis in November 2018, while David Turnbull lined up on the left of Motherwell’s front three in his first start since knee surgery in the summer of 2019. Allan Campbell was a surprise omission.

An early 20-yard free-kick might have suited Turnbull, who scored 15 goals in 30 league games during the 2018-19 season, but Long took it and fired over.

Carson came through a couple of early tests, stopping Lee Erwin’s header and touching Stewart’s strike from a tight angle onto the crossbar.

The Northern Ireland international was given little respite as Motherwell’s new club captain Declan Gallagher conceded the penalty with a risky challenge at a loose ball.

The defender claimed he won the ball as he dived in on Harry Paton but referee Nick Walsh deemed it a reckless tackle and booked the Scotland player.

County turned off their low-key crowd noise as Stewart lined up the spot-kick and the striker sent Carson the wrong way.

Motherwell had a great chance to level immediately when Mark O’Hara played Long through but the striker took an extra touch and then hit the near post.

The visitors struggled to break County down for the rest of the half and Turnbull was moved to a more familiar midfield role after Lang replaced O’Hara at the break.

Sherwin Seedorf made an impression when he came on and the winger set up Lang for a free header but the on-loan Wigan forward saw his close-range effort clawed away by Ross Laidlaw.

The same move set up Motherwell’s penalty as Coll Donaldson was penalised for a tug on substitute Jordan White after Lang headed the ball across the face of goal.

White threatened from several crosses and Seedorf had a shot deflected over but Motherwell’s chances ran out when Lang was shown a straight red card in the 87th minute for chopping down Michael Gardyne to halt a counter-attack.