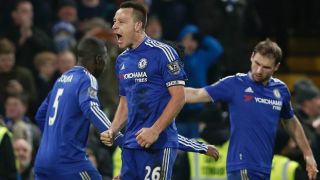 Chelsea captain John Terry has hit out at "lazy" critics of his performances and insists he can play for the club for two or three more years.

The 35-year-old made his 700th career appearance on Saturday in the pulsating 3-3 draw with Everton at Stamford Bridge.

Terry scored an unfortunate own goal but made amends with a fine finish in the eighth minute of stoppage time to salvage a point for Guus Hiddink's side.

The former England captain secured a one-year extension at Chelsea in March last year but he is confident he is showing enough to justify another deal.

"I certainly think so," he said. "When you get to a certain age, there are a lot of people out there who think 'he's 35, going on 36 and maybe his legs have gone'. But I have never had legs, it's as simple as that.

"I have never been quick all my career. For me it's lazy journalism from everyone. It just gets in their heads. But physically, I probably feel as good as I've ever felt in the last two or three years. I'm in the right state of mind. I'm still hungry. I want to win and finish my career here.

"But I'm not thinking of that. Last year, it was a couple of months from now before things got sorted. For me the most important thing is to get us out of this and up the league table."

Hiddink does not believe Terry has suffered any sort of decline in recent years and appears to be backing his captain to secure a new contract.

"If I am asked I will give my honest opinion about that," he said. "If I say what I'm saying now, spontaneously out of my heart, then you can imagine what I think.

"For me there's not much [difference] between John in 2009 and now. For me you would have to underline that with data.

"You can say hey, make a test and say he has lost some speed, but I cannot see that. He's fit, he trains well, he takes care of himself, takes a good rest, which you have to do at that age. I cannot see that he is slowing down a bit."