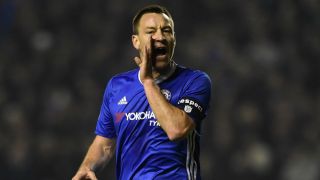 Captain John Terry has been named in the starting line-up for Chelsea's match against Watford.

Terry, 36, is leaving the Premier League champions at the end of the season but will get the chance to start for only the fifth top-flight game this season on Monday.

Michy Batshuayi, the striker who scored the title-clinching goal against West Brom, gets his first league start since moving for £33million at the start of the season.

Nathaniel Chalobah makes his first ever Premier League start as Chelsea celebrate the title, Kenedy is handed his first league appearance of the season and N'Golo Kante returns from injury as Antonio Conte makes nine changes to his team.

Diego Costa, Cesc Fabregas and Gary Cahill are among the Blues' substitutes at Stamford Bridge.