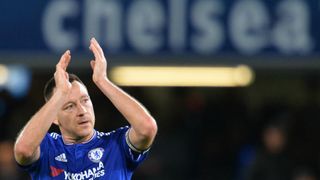 Terry was forced to take a bench role at the start of the season, and some began to question whether his days at the top level of English football were numbered.

However, Hiddink backed his skipper, insisting he has the legs and the desire to continue on beyond this season.

"I must say he looks physically fit but also what is important when you're halfway through a season is that he's very fresh - and I mean fresh in the mind," Hiddink told reporters.

"He's very eager to train every day, to play.

"Normally - it depends a bit on the physical shape and genes - but most of the time when players come to 32, speed is dropping down and everything is more difficult.

"There are exceptions, depending on position as well, but normally after 32 they drop from their top physical abilities.

"Of course one day the body will say 'Hey, slow down a bit'. But I don't see any of that [in Terry]. I've not been asked [by the board about Terry] but these [experienced] guys are very important for Chelsea."

Hiddink's next test is an FA Cup third-round match against Scunthorpe United on Sunday.