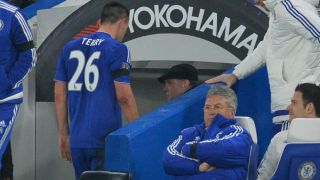 Interim Chelsea manager Guus Hiddink has admitted John Terry may be closing in on the final few weeks of his career as a player at the club.

Terry has already begun taking his coaching badges and Hiddink revealed that the captain would shadow him at AFC Bournemouth to gain a greater insight into working as a top-flight manager while he continues his recovery from an Achilles injury.

But while Hiddink says Terry's days as a manager are still some time away, he said his playing days at Chelsea might be numbered, particularly if his injury problems continue to persist.

"It might be the case," Hiddink said when asked if Terry was nearing the end of his Chelsea career.

"I am not sure about the future. He likes to play desperately, as soon as possible.

"I think he had the will and the wish to play [against West Ham] and the urgency of that game was a little bit too high compared to his physical fitness, he didn’t have an injury but he got a little bit of a setback after this last game.

"So hopefully he is feeling better than a few weeks ago which makes me think he might be available very soon."

But Hiddink said it was good to see the defender take an interest in managing.

"That [Terry possibly becoming a manager] is a long way away," he said.

"But it is always good when players, and I have the experience with other players in my management career, who are interested highly in football and not just playing in their position, doing their job and going home, but also on broader interest, have the view from the other side, the management side. That is nice.

"The older players are getting interested and that's why it is good to have them close but first of all I consider him as a player.

"I like people to be involved in the team. Sometimes we take more people than the 18 for the list."