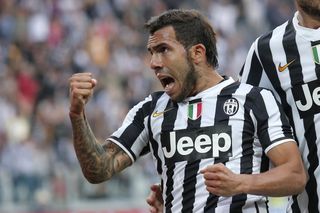 Roma secured a ninth consecutive win of the season with a 1-0 victory against Udinese on Sunday to remain unbeaten in 2013-14, but Tevez is not concerned and expects Juventus to close the gap on them.

Juventus currently sit in third place with 22 points from their opening nine matches after Antonio Conte's side bounced back from defeat to Fiorentina with a 2-0 win over Genoa on Sunday.

Tevez struck the second of his side's goals – his fifth in Serie A this season – and he believes Juve have the quality to retain the title for a third successive season.

"It's no problem, there's a long way to go," he said. "The important thing is that we carry on playing like this.

"We needed to respond to our defeat in Florence and we managed to do just that.

"We played in the way that boss Antonio Conte had asked us to."

Sunday's victory leave's Conte's side level on points with Napoli and four clear of Inter and Fiorentina.