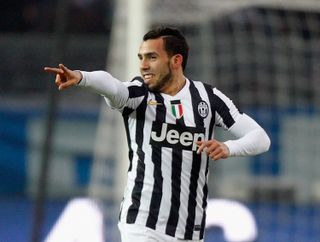 Antonio Conte's side sit eight points clear at the top of Serie A at the halfway stage of the season and the Argentina international wants to add another league title to his collection.

Tevez has won championships with Manchester United, Boca Juniors and Corinthians during his career and the Serie A crown would be a welcome addition to that list.

The 29-year-old has also set his sights on the UEFA Europa League which Juventus will enter in February after being eliminated from the Champions League group stage last month.

"I'm thinking about both competitions. I want them both," he told La Gazzetta dello Sport.

"I won titles in Argentina, Brazil and England. Italy would be the fourth country. I dream of writing a page in the history of this club.

"(The Europa League) is the only international competition I'm missing at club level."

Juventus may have a commanding lead at the top of the table but the forward knows there is a long way to go before he can celebrate his first trophy since arriving from Manchester City.

"It's not finished," he added. "We have some of the toughest away matches: Napoli, Roma, Lazio, AC Milan and Udinese, for example.

"It's still the toughest league in the world. It's the university of football. Tactically, it's at the highest level here and we suffer on the field.

"Italy is completing me. If you can score goals here, you can anywhere."