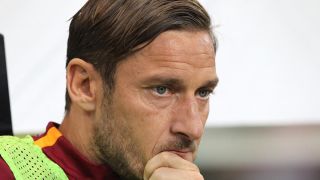 Totti was expected to retire at season's end after the club's new sporting director Monchi said the 40-year-old would hang up his boots and become a director.

But there is confusion about Totti's future after he refused to confirm his retirement on Wednesday.

In a statement on the same day, he was again unwilling to say he was calling it quits, writing: "Today I answered the umpteenth question about my future with a joke.

"All I know is that Juve comes to Rome on Sunday and I'm thinking only of that because we're fighting right to end of the championship and Rome comes before everything else.

"The rest can follow on afterwards and there'll be time to talk about it."

A World Cup winner with Italy, Totti came through the youth system at Roma before making his senior debut in 1993 as a 16-year-old.

He has gone on to win a Serie A title, two Coppa Italia trophies and a pair of Supercoppa Italiana crowns during his career at the club.

Totti has scored 307 goals in 783 appearances for Roma – both club records.

He has netted three times this season, with his side sitting second in the Serie A table.