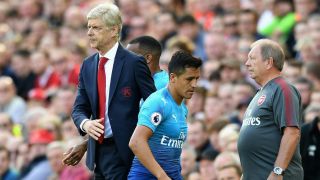 Claudio Bravo insists there is "nothing negative" about the transfer saga surrounding Arsenal forward Alexis Sanchez.

The 28-year-old's future has been the subject of intense speculation throughout the transfer window and it is reported that Manchester City have stepped up their efforts to sign him before Thursday's deadline.

Pep Guardiola's side are said to have seen a £50million bid rejected on Tuesday by Arsenal, whose manager Arsene Wenger has made it clear for a number of weeks that he does not want to sell.

Sanchez made his return from injury in the 4-0 loss to Liverpool on Sunday and cut a dejected figure during the game and on the bench after being substituted in the second half.

But Chile team-mate Bravo says Sanchez's future is bright regardless of where he will play his football for the rest of the season.

"It's good that we don't see Alexis Sanchez becoming frustrated about things, because he isn't going through a bad situation," said the City goalkeeper. "Quite the opposite.

"He has a great future ahead of him, whether he remains at Arsenal or looks for new horizons. But everything is in a positive light. There's nothing negative. He doesn't have to be down, quite the opposite."

Bravo's own future remains in doubt, with the 34-year-old now firmly second choice behind Ederson at the Etihad Stadium.

The former Barcelona man admits he would prefer to be playing every week but he has no concerns that his form for the national team could be affected.

"Not playing enough games always worries you. I would always like to be playing," he said. "But I had a longer holiday because I reached the final with Chile in the Confederations Cup.

"But regarding the feelings towards playing time, I'm not worried because I have gone through worse things than this. Here in Chile we are specialists in talking about lack of rhythm, in doubting players and their abilities a million times. I think I always manage to turn around the situation."

Chile face Paraguay and Bolivia in World Cup qualifying over the next week.